The Damn Truth
Now Or Nowhere
Spectra
Released: May 7, 2021

Montreal’s own The Damn Truth will be releasing their third album next week – and it is straight fire. 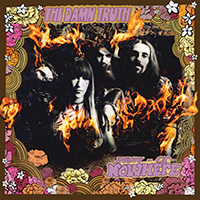 It has already been nearly a decade since we last had a new full-length album from The Damn Truth – it’s about damn time we had something fresh, and that is the truth. They say good things come to those who wait – and although not always the case, you can get bet it is in this scenario. Oh yes! Not only are The Damn Truth back, but at their best yet, too. If there is a bright side to this pandemic, it will be that bands who haven’t been able to hit the road have hit the studio instead. By the time this bastard named Covid is a thought of the past, we will be swamped in great new music. No way you look at that, it can be a band thing. Can it?

On Now Or Nowhere, The Damn Truth explore themselves as rockers, rollers but also as the self-proclaimed hippies they are. In sound and in spirit as well. When it comes to sound, Now Or Nowhere bridges that 60s ideal and sound, with a more modern style of rock n’ roll. It would seem that the time away the recording studio, the days and nights on the road in the van together, have yielded sunshine. The vibe throughout this record is uplifting. Bright. Like daybreak atop Mont-Royal – with the Leonard Cohen mural smiling back.

“I think with this album we tried to put a conscious effort into writing more positive and uplifting songs,” Lee-la Baum explains. “Our previous albums were more of a mirror of what we felt was going on in society; they had a darker underlying tone. I felt like there was a lot of frustration and anger in the songwriting that translated into the performance as well. With this record, we really wanted to bring hope and positivity back into our songs, focusing on love and not fear.”

Tom thinks back to the turning point that inspired the album’s title. “There was a moment late at night, in the van, on the road somewhere on a Canadian highway, where we decided there is no more putting off love, no more putting off hope, no more putting off resilience and courage. We decided that it’s Now or Nowhere.” If they had known then, that then was now – and now, with covid-19, here we are. Nowhere. It’s funny how things work out sometimes. Locked down, at home – and in Montreal, under curfew. This is who we are now.

The Damn Truth are very good at their craft. Great rhythms, solid guitar licks. Upbeat blues, if such a thing can exist. Feel good rock n’ roll. Positivity and good vibes. Like how The Black Keys always seem to feel so shiny, even if they’re singing about broken marriages and gloom. As if even the biggest storm couldn’t wash away their smiles. Oh and and some guy named Bob flippin’ Rock was the sound engineer on it. Well, all but three songs, thanks to Covid-19 of course. I don’t even need to put into words how massive the sound is.

Let me tell you, Lee-la Baum has pipes on her. She can sing as well as anybody in the music world and it is so refreshing to hear such a vocal range in modern rock. Little wonder why The Damn Truth had a video clip shared on the official Janis Joplin Facebook page. Baum could be compared to Joplin. She doesn’t have the rasp in her voice, but in terms of vocal range, you’d have to say Joplin with a side of Myles Kennedy. If that seems like a lofty comparison, well then you need to lend your ears to this record, and get back to me once you have.

Pre-orders can be found here for physical formats, and on their bandcamp for digital copies.

For Fans Of: Alter Bridge, The Pretty Reckless, Elephant Stone