Montreal punk legends The Nils tease with a new single, Fourth Line, ahead of their new EP coming later in the year. 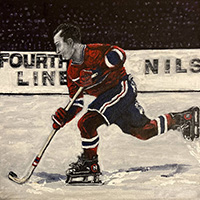 It’s hard to believe that seven years have passed since The Nils last released new music, but alas that is the case. Starting off in 1978, the same year as the Dead Kennedys for anyone keeping score, The Nils have had a very tumultuous path along the way, but have always battled back. Sort of like a grinding playing on the fourth line. Hockey fans get it.

When it comes to Canadian punk rock, the band that is accredited with starting it off is the great D.O.A, who were first to drop an album with 1981’s Hardcore record. And while great groups like Teenage Head, The Viletones, The Diodes, The Subhumans (not to be confused with the blistering UK band of the same name), and so on get their fair share of recognition – one name that is often unfairly left out is The Nils.

I can only assume that the reason for this is because of the amount of times The Nils broke up or went on hiatus, only to resurface again and pick up right where they left off – yet that still isn’t a good enough reason. Personally, I would consider The Nils as vital to the Canadian punk rock scene as Teenage Head – who themselves were often mentioned alongside groups like the Ramones. Think about that for a second.

See Also: No Fun At All “Seventh Wave” Review

If it is fair to compare Teenage Head to the Ramones, which I believe it is – then The Nils should be held alongside a counterpart such as the Replacements. Get where I’m going with this yet? So, when The Nils drop a new single, that will lead into a new EP that drops next month, you can damn well believe my ears perked up. This is the first new track from the guys since they released Shadows And Ghosts in 2015; their first album of new material in over twenty-five years.

With a fresh new NHL season just barely underway, a song about the grit of hockey from one of the longest running punk bands in the nation hits about right. The lyrics to Fourth Line are glorious, especially to an old fart like me, that not only loves the game of hockey, but the gritty game that I grew up watching. A song about those tough sons of guns that, not unlike The Nils, are vital to a teams success without ever really getting the credit they deserve feels great.

Sonically, Fourth Line sounds a lot like the material found on 2015’s Shadows And Ghosts, with a few hints towards their 1987 self-titled album as well. At just two and a half minutes in length, it goes into the hard areas of the rink, grinds into the corners, digs out the puck and crashes the paint.  And ode to all the grafters. The hard men. The unsung heroes. The Ghost of Sanderson knows. Enrico Ciccone knows. And it shows.

Beginning off with a great riff that flows effortlessly into a really well written yet fairly simple flow, into a solid solo and back. Melodic and hard rocking, with the vocals of Carlos Soria bringing the whole package to life. Fourth Line is a catchy earworm of a tune. It has bite, it has teeth. It shows.

In the words of the immortal Don Cherry, I’ll tell ya right now, I am eagerly looking forward to hearing the new upcoming EP from The Nils. And it shows!

Digital copies of the new single can be had for just a buck (unless you’re feeling generous and wish to splash some cash on the boys) at their bandcamp page – and their new EP, Five Roses, will be released on November 18, 2022. Show some support and get ready to get rocked once the new EP drops.

For Fans Of: Teenage Head, Replacements, The Minutemen