Thousands took to the streets in Montreal on July 1st, 2021 – to denounce genocide in the wake of 1505 unmarked graves of indigenous children

On what is normally a day of celebration of a nation, this year was a much more somber day of reflection. July 1st is Canada day, but with the recent unearthing of 1505 unmarked graves that contain the remains of indigenous children, found on the grounds of residential schools that were operated by the Catholic church – many chose to spend their day in solidarity with the mourning First Nations instead, to denounce systematic racism and genocide. 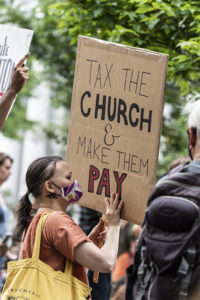 At two o’clock, people began gathering on the corner of Parc & Rachel, the site sometimes known as Tam Tam’s, where a statue of Jacques Cartier stands. After some spoken word segments and some healing dancing, those that had gathered began marching to Place du Canada near René-Lévesque & Peel – the site where a statue of John A. McDonald stood until until being torn down in a protest on August 29, 2020, where protests to defund the police with a goal to end all systemic racism within all sectors of the Canadian government took place.

This most recent discovery brings the total number of casualties to a massive 1505 – a number that is likely to drastically climb in the coming weeks and months. A little over a month ago, using ground-penetrating radar, the remains of 215 indigenous children were found buried on the site of the former Catholic church-run residential school in Kamloops, British Columbia. In the following weeks, 715 more remains were uncovered near a former residential school in Saskatchewan.

It is estimated that more than 150,000 Indigenous children were forced to attend these institutes that sought to irradicate the First Nations peoples. Thousands of children died of disease, neglect and the physical, mental and sexual abuse dished out by those that were supposed to be caring for them. Priests and nuns, the RCMP and the political leaders of Canada.

See Also : No pride in genocide – Canada in shame

Thousands took to the streets of Montreal, many wearing orange and carrying signs, to bring attention to these recent discoveries and to denounce these acts of genocide. To heal, and to demand accountability from the Canadian government, the RCMP and the Catholic church.