American Terror have a new single out, titled Attitude, ahead of an up-coming sophomore record. 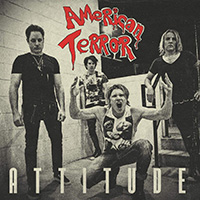 Passing judgement on an artist that releases one-track singles is frustrating, because there is always that slight chance that the artist in question is better than the one track they’ve submitted upon which to be judged. I never understood the point of releasing single tracks. In the days when singles were coming place, you would have at least two, somethings three songs on a 7″ – you would have something to go on. Something to base an opinion. When a release has just the one track, it just feels cheap and pointless.

Hell, it is what it is, right? So here we have our one song release, a song named Attitude. And ironically enough, the last thing this track has, is attitude. Now, keep in mind that this is the first and only song I have ever heard from these guys, so maybe there’s more to them than this – and I hope that is the case. Because this isn’t much to write home about. Simplistic and repetitive guitar work with some seriously cringe worthy lyrics and vocals. This is douche rock.

I suppose American Terror take on a punk aesthetic here, but in reality, this is a song made up of roughly two chords. Repeat, wash, repeat. Throw in a basic solo. Your basic rock drum beat. You get the point. If bands must insist on dropping one-track releases, at least make it something interesting. Two power chords and dumb lyrics is never going to propel anybody anywhere.

It would seem that this is a super group of sorts. American Terror features guitarist Pat Valley (Grayson Manor), bassist Murphy Karges (ex-Sugar Ray), drummer Rob Hammersmith (Skid Row), and DJ Soulman (Phunk Junkeez), with bassist GK Via (Grayson Manor) stepping in live. Apparently, this single is taken from their upcoming sophomore album – and hopefully a full record offers more of a glimpse into what American Terror are, because at this moment, there isn’t much here at all.

This new track is available on Youtube and Spotify. Apparently there’s a second full-length in the works, so… yeah, do with that information as you wish.