Five years on, and NOFX are back with a new ten track recording, named Single Album. 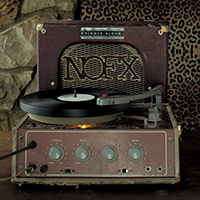 Ever cynical, the lads in NOFX have resurfaced once again, with their first album in five years. Has it been that long? Where the shit does the time go? It has indeed. Single Album is called that, through gritted sarcasm, as the record was meant to be a double album, until the pandemic got his snarling teeth on us all and chewed NOFX up and spat them out.

After all these, so many beers, Fat Mike still has the dry wit and caustic spit that was so vital in catapulting his band ahead of the heard. The agility to still come up with scathing lyrics, in his trademark sputter is quite honestly inspiring. Feathers always were and seemingly always will be ruffled. On Fuck Euphemism, Fat Mike sings “my gender isn’t fluid but that’s how I like my beer” which is bound to offend someone in this day and age, and is but a sample-sized bite of what can be found here on Single Album. Mike refuses to surrender his freedom of speech, like so many have. Yet, he remains as relevant today as he and NOFX have always been – and they always have been. Quite amazing really.

The overall tone to this record seems to be a little on the darker side this time around. Well, darker than normal anyway. Somehow, this is a fine line here between the morose and the upbeat. Ska tunes and punk rock jams, the formula we have come to expect through all these years and who knows how many albums. I stopped counting a ways back down the line. Yet you can feel something has changed. Fat Mike has been through a lot since the last record. Rehab and divorce, loss of close friends such as Steve Soto, from which comes the eighth track on this new record, Grieve Soto. Lyrically, Fat Mike is brutally honest and completely open about a lot of taboo topics, both from his own life and his world views.

Through out the years and all the albums and songs, NOFX have remained fairly formulaic. Something you could set a watch too. Although that is pretty much still the case here, they have also ventured into new grounds while still remaining true their foundations. And you know what, I’m digging it. When you’ve spearheaded a movement of a genre, like NOFX have, with help from peers, sure, but still – there is a certain stigma that remains with you. This is your child, your baby – now you have to ride that same wave for the rest of eternity. Look at bands like Bad Religion or Pennywise; instantly recognizable no matter which record is playing. New yet the same. This is the first time NOFX is really stepping out a adding a little spice to the soup.

The boys have a fresh take on a classic NOFX jam. The cult classic Linoleum, and my personal favorite song from their wide catalog. They call this rehashed version Linewleum. Sadly though, it is a retirement song. Viscously hilarious, as it explores how Mike’s daughter read the bands book and now knows all the bizarre shit they’ve done through the groups existence. “What keeps me up at night is that my daughters friends know that I drank pee”. I mentioned earlier than this is a walk on the dark side of the farce, but Mike’s humor remains very much in tact and sharp as a razorblade.

Fish In A Gun Barrel has taken the title of world’s saddest Ska song. I didn’t even know Ska could be sad. It can. I know that now. Doors And Fours continues the solemn, speaking on close calls with the end, death, and those lost along the way. In a sort of how did I survive all this stuff sort of way. If you’ve read the book, you have an understanding of this sentiment. All done with some slick slide guitar work. It takes harsh aim at drug abuse and the frailty of human life. How nobody really cares about addicts and their outcome. There is a really cool backing gang chant that runs parallel to Fat Mike’s dirge, too. “Old L.A punks, they never die from old age because they all O.D”.

On the records final track, Your Last Resort, we see Mike at his lowest and most honest. Sadly singing along to a piano about who he is and how his relationship with his now ex-wife fell apart. Suddenly, the song goes from a Cokie The Clown cut to the most aggressive and fast NOFX style romp the band have seen since their mid-90s heyday. Solid. All in all, Single Album is a surprisingly good return to form for NOFX. Lets be honest, their schtick was beginning to get a little stale.

All these years on, NOFX still reign atop the broken skateboard heap. Crowned in Crown Royale and crazy tall tales. Grab yourself a copy over at the Fat Wreck website, and browse their catalog or great Punk Rock artists while you’re there.

For Fans Of: Lagwagon, No Use For A Name, Pennywise